Well it is certainly a busy time for a blogging Earth scientist with a mission to explore human (mis)understanding of the Earth and its systems. In addition to the current desire to put the general interests of the global public weal dead last in the struggle for existence, with protective preference provided to just about anything else on Earth, including rocks (literally), and the climate-based political power grab by all governing bodies around the globe, we are, this year, asked to ‘celebrate’ the tenth anniversary of the landfall of Hurricane Katrina. Celebrate????

Well, as long as we are now told that carbon dioxide is no longer causing ‘Global Warming’ and is also not the root cause behind ‘Climate Change’ but is, rather the force behind ‘Climate Disruption’ and that every bit of weather is now evidence of our violation of mother Gaia, let’s look back at the catastrophe which was Katrina.

A few years after Katrina, a court ruled on the issue of culpability over that flooding of New Orleans in Hurricane Katrina and found that the Army Corps of Engineers was largely to blame for the breach of the levees and the flooding of large areas of the city.

That is a nearly unbelievable ruling and I am surprised that more has not been made of it over the intervening time. The Army Corps of Engineers has been ruled as negligent in its original creation of, and in its subsequent absence of maintenance and upgrades to the New Orleans levees which failed during Hurricane Katrina. The first few litigants in the case were awarded something on the order of $700,000 each by the court, but we can now expect the rest of the displaced people to belly up to the bar (pun intended) to get theirs. This is going to be staggering.

So… why DID the New Orleans catastrophe occur? WAS it really the fault of the ACOE? Was it, therefore, preventable?

There is a geologic reason for it, and I have some sympathy for the Corps.

We have to protect New Orleans with a large artificial embankment because New Orleans is essentially at sea level or slightly below mean sea level. That has happened because the Earth’s crust under the Mississippi delta is subsiding as a result of the massive load of sediment deposited over time by Ol’ Man River. It has NOTHING to do with sea level rising!

As the crust is de 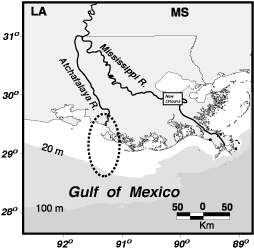 pressed and the area subsides while it is filling with sediment, the most direct route for water to flow from higher elevation upstream areas back to sea level shifts around. It has shifted about six times over the past 5000 to 6000 years (that’s seven different deltas). The current delta represents only the past 500 years or so. As a result of shifts in the depression/sediment balance, the course of the mighty Mississippi is trying to shift again – this time in a major way. The shortest route back to sea level for all that water is down the Atchafalaya basin which almost touches the Mississippi channel at a point well north of Baton Rouge.

Well, nobody wants the river to head down a different course – not people in Baton Rouge and New Orleans whose livelihoods depend on the river, and especially not the people who live in the Atchafalaya basin which would, of course, be drowned in the enormous discharge of the Mississippi. So, beginning at the point where the Miss. and Atch. rivers nearly meet, there is a series of flow control structures, beginning with a deflection dam which prevents the Miss from jumping ship into a new channel, and continuing downstream in a series of levees (artificial banks) which have become necessarily higher as the surrounding land continues to subside.

This is not something new. Back near the turn of the last century, the Miss was not navigable by large ships because the channel was too shallow at New Orleans and downstream. After many ideas a solution was found – the river was constrained between straight jetties and levees to – get this – increase the velocity of the flow which would scour the stream bottom, making the river deeper. It worked, the river became navigable. However, constraining the flow between artificially narrowed banks (levees) results in higher flood stages. Think about it. We eliminated the flood plain of the river by building towns on it which then had to be protected from flooding by building levees. Do you see the root cause and snag here – people built on land that naturally FLOODS episodically. The natural flood plain was wide so flood waters were distributed over a large area. Now, with the levees, the same volume of water still flows down the reiver but within a narrower channel. The result is that the height of the flood stage must be greater, which, in turn, requires higher levees.

The volume of flood water is much higher now than it was 100 years ago. The increase in impervious land cover (pavement and buildings) all along the Mississippi upstream of New Orleans results in more stormwater runoff during storms rather than infiltrating into the ground. Of course, MORE stormwater flowing through a narrowed channel requires ever-higher levees, which means an ever-increasing water pressure on the earthen levees during floods, which requires ever-constant vigilance and repairs. Ergo, the court’s ruling against the Corps.

But is it the Corps fault? What we are now living with is the legacy of the original narrowing of the stream channel (not an idea or proposal of the Corps) to increase velocity AND with increased runoff within a land area which comprises about 40 or more percent of the entire United States. 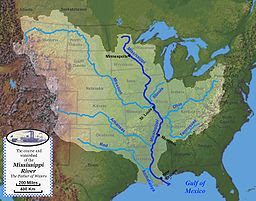 is to blame and each successive generation has had to cope with the cumulative legacy left over from past generations. Ultimately, we will lose the battle with the Mississippi and it will flow down the Atchafalaya basin. Those of us alive now can only hope that it is after we have departed this Earthly paradise and that there will be enough advanced warning for the people at that time to evacuate the Atchafalaya basin and re-settle everyone onto higher ground.

So the Army Corps has been set an ultimately impossible task as a result of a series of historical blunders which, at the respective times, seemed to be good ideas. The Corps has to control the flow of one of the largest rivers on Earth at the downstream end of a continent- sized drainage basin on a budget which is far from adequate and against all political pressure to “not muck up sensitive riparian (stream side) eco-systems,” or to “not disturb existing communities…”Ironically, the group which has been empowered by Congress to regulate and oversee the protection of riparian corridors, wetlands, swamps, bayous and the like is…. The Army Corps of Engineers. So in order to repair the levees at some locations, the Army Corps cannot implement the necessary work because the land is protected by The Army Corps, and work is forestalled for decades while the necessary studies and paperwork/permits/mitigation plans are completed to protect a swamp or two while in the process of protecting HUNDREDS OF THOUSANDS OF PEOPLE and one our major cities. During that time, the cost of the work goes up and up, with the result that by the time the Corps has approved work by the Corps, the funds have been drained away to other projects and new appropriations must begin – always inadequate.The answer to this mess? Well, there are two parts to it. One, seemingly easy, the other a tough nut to swallow.

First, we have to get beyond the point of protecting small land areas against all change when the public welfare is at stake. Protection of wetlands is all well and good, but when it becomes the overriding factor in land use decisions which affect public safety, we should have NO question as to which will go.

Second, what can we actually DO about the Mississippi? There is no good answer – only several expensive and unpalatable ones:

1). spend an awful lot (and I mean an AWFUL lot) on repairing and maintaining an ever-increasing levee system, along with other controls and continue to bail people out as they continue to return and get washed out every 50 years or so. It will continue to happen because the land continues to subside and there will be increasing water problems; i.e., we live like the Dutch – below sea level in constant threat of flooding;

2). relocate everyone in the Atchafalaya basin and let the Mississippi do what it is ultimately going to do and get it over with – i.e., Baton Rouge and New Orleans become high and dry, which is inevitable anyway, although perhaps not for several hundred years;

3). stop paying for the re-settling of people flooded out in low-lying areas behind the levees. Rather than spending federal relief money to put them back, we pay to relocate them and begin the long, slow process of re-establishing the floodplain of the Mississippi, albeit behind the levees, which are still needed to keep the river deep enough for shipping.

I dare any politician to seriously propose any one of those.

One thought on “The Corpse of the Corp”